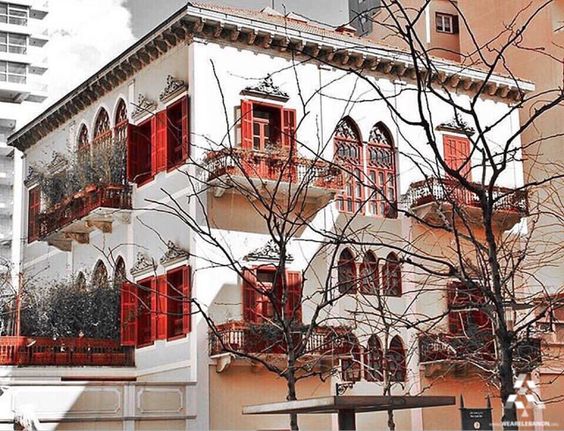 After the port explosion in Beirut on the 4th of August 2020, a large number of traditional houses were destroyed. The restoration and renovation of these houses is a major step to carry through the upcoming years, to avoid leaving them abandoned by their owners. The process is expensive and requires qualified and high-skilled professionals to do the job.
In the previous article, we went through the main architectural typologies impacted by the blast, the endangered cultural heritage and the urgent call to preserving the existing and restoring the damaged.
In this article, we tackle some major architectural elements that play a main role in the restoration and renovation of traditional Lebanese houses, specifically the traditional triple arcade house.

1. The roof: Triple Arcade houses are known for their brick roofs. In any normal situation, a leaky roof can cause serious damage to all elements of the house, as it can destroy everything inside the house from framing to foundation. This is why replacing or restoring the roof of your traditional home is an important step, as it can prevent future damage and leaks, improve your home’s energy efficiency, and increase its value. After the explosion, Beirut’s Triple Arcade houses were almost completely destroyed, and most of them now need to be rebuilt and restored. When restoring your house’s roof, you need to identify any cracks or broken tiles and replace them, get rid of the dirt, dust, and mold to improve the appearance of your house, and apply protective coats and seals to prevent any further leaks. It is also important here to get the appropriate materials that were used in traditional houses. Fortunately, brick roofs are still quite popular in Lebanon, which makes the process of finding the same materials used to build your roof easier.

2. The floors: Generally, floors are the portion of the house that receives the most pressure from human beings and other items placed in the house. In traditional Lebanese houses, notably Triple Arcade houses, the floor is most often made of stone, and is only rarely weakened as the time passes by. However, recent events in Lebanon might have damaged or destroyed the floors. This is why it is important to make a proper inspection of the floor to check for any form of damages or a bad portion. Deep holes or chipped edges in stone flooring can be fixed by filling them with a hydraulic lime mortar. On the other hand, stone flooring is timeless and matching new material can still be found in modern days, making the replacement of a damaged stone easier.

3. The windows: Triple Arcade houses have three noticeable arched windows placed next to each other, hence their name. And while beautiful in design and quite sophisticated, they can be difficult to repair once broken. However, it is best to keep the design of the original windows in your home and fix them up. Unfortunately, the explosion that rocked the city of Beirut destroyed all windows in the city and the surrounding area. This is why it is important first to inspect the windows’ frames and sills, and make sure that they are not damaged. Damaged frames and sills can be fixed with epoxy, which helps reconstruct the rotted or broken portions. If the windows are heavily damaged, however, it is important to remove the damaged parts and the old paint and replace or patch up all the holes with filler. Sealing the windows from the outside after replacing the glass is also important, as it ensures that there are no leaks in the future.

4. The doors: Doors are an important part of any home’s façade. An inauthentic or poorly matched replacement for traditional doors could, in fact, have a significant negative impact on your home’s appearance. This is why it is best to keep traditional doors and fix them up to preserve their intricate designs and old vibes. Triple Arcade houses have doors that are large, heavy, and made of solid wood. An architect’s goal in a restoration project is to keep that vintage look. Just like windows, doors in most houses in Beirut have been either destroyed or damaged, which means that they need to be repaired. Knobs and hinges, for instance, can be polished up and restored, while worn out or cracked parts can be sanded, filled with putty, and repainted. It is important to make sure that your doors are water and airtight as well, adding weatherstripping to seal air leaks to help increase the doors’ efficiency.

5. The molding: Molding is a decorative strip of material that is used to finish off the look inside a house. They were, and still are, common in traditional houses in general. They are often used where the walls and the ceiling intersect, adding visual interest to the room. Molding also adds character and elegance to the room, which makes their restoration necessary, especially in a traditional house. In the case of severe damage, you might need to make a replica of the molding that is already in place in the room to give the room the same vintage appeal.

6. The heating and cooling system: Naturally, traditional and old houses were not built with air conditioning systems. However, they often had fireplaces or wood-burning stoves. This is where renovation and restoration come into play. Fireplaces and wood-burning stoves give heating options during the cold seasons, but, as time goes on, you might need to restore the original fireplace and renovate it for a better look, which would make your home look elegant and well structured. Restoration of old fireplaces or wood-burning stoves includes cleaning away rust, stripping away old paint, repairing cracks, dents and harmed metal components, and repainting. On the other hand, you can install an older, but functional, air conditioner in your house to provide a source of cooling.

7. The plumbing: It is extremely crucial to have the plumbing system in your house inspected regularly, especially after Beirut’s incident. Some water pipes can be severely damaged and need to be replaced to avoid water leakage and water wastage. On the other hand, it is also important to replace extremely old pipes, as they can be made of dangerous materials, such as lead and Polybutylene, which could be a serious health hazard. Plumbing lines can also be made of galvanized steel, which is known for corroding and rusting over time. PVC piping is a good alternative for these plumbing lines, as it can last indefinitely and is cost-effective.

8. The wiring: Bad wiring can cause major problems over the years. You might need to check the electrical wiring in your home after the explosion to ensure that they are not a life hazard. Old or damaged wiring systems can be quite dangerous for the residents of the house, as they are the most common cause of residential fires. It is always advisable to regularly upgrade your electrical wiring systems to avoid any accidents in the future. This includes changing the fuse box in your home and replacing it with a circuit breaker box to avoid fire hazards.

When renovating or restoring your traditional house, you not only have to think of the past, you also have to think of the future. While your house still needs to look vintage and have a traditional look after its architectural restoration, it also needs to look timeless, so that it could still be functional in the future. After the explosion in Beirut, architects are now looking to restore as much of the remaining traditional houses as they can, hoping to save as much elements in these houses as possible to protect Lebanon’s heritage. Some houses now have some serious foundation problems that need to be addressed immediately to ensure that they do not collapse.